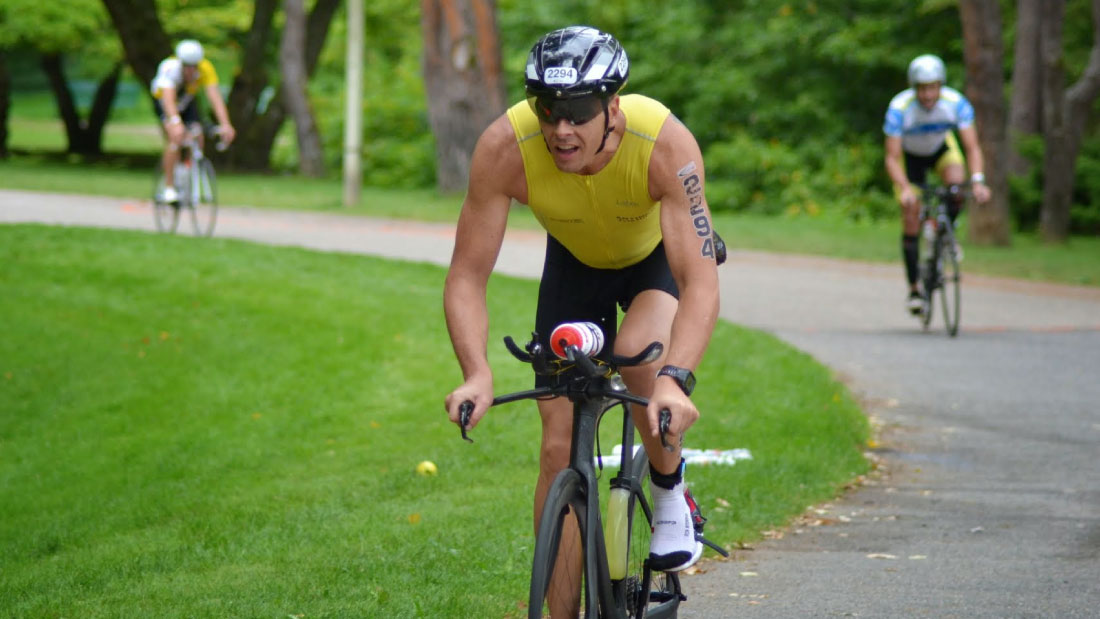 these endurance sports activities are necessary for his personal work-life balance. He opens to us the doors of what he calls his secret garden and describes the sense of fulfillment he had when participating to a long distance triathlon race, an “half iron man”.

Jean-François, in 2014, in the city of Vichy, you participated in a triathlon. Tell us more about it.

The competition involved the completion of 3 disciplines: swimming (1,9Km), biking (90Km) and running (21Km). There are different types of races, this one was a long course one and people frequently call it “half iron man”, referring to the famous ultra distance category (4Km swim, 180Km bike, 42Km run).

Congratulations! And how did you feel during the race?

I felt so well… these hours were rewarding the months of hard training. Only the swimming was not as successful as planned, but the rest happened as expected. I remember cycling and telling to myself that I was living a moment of absolute fulfillment. I almost cried.

You mention the words “training” and “planning”. How much preparation does it represent? How many hours did you train every week?

It was a 5 month preparation, with a progressive increase; in short, the first week, I would train 3 hours, but 20 hours at the peak period. Typically, I was starting my day at 6am with a 1 hour swimming session; and then, after work, I would go running or biking, for an hour or two.

The Vichy triathlon took place in September, so the preparation phase went on at the best moment of the year, with the longest daylight periods. Although sometimes difficult, especially the last weeks, it was a lot of pleasure too.

You have a scientific background, with a PhD in computer science. Did it have an influence on this experience?

It had, in the sense that I really enjoyed myself in the planning and preparation phases; I was trying to optimize all I could! For example, a researcher friend of mine put positional sensors on my body in order to help me define the best position on my bike according to criteria of confort, aerodynamic shape and power rating in Watts.

I also used a cardiometer and a powermeter in order to be as precise as possible during the bike training sessions. I really think it helped a lot to get the most of myself in this very short preparation period.

You are “half” of an iron man. When do you plan to become a “complete” iron man?

I’m 43 today, I’d like to do it before I am 50. Actually, following the Vichy triathlon, I had a shoulder injury which still does not let me swim long distances, I have to be patient. That’s why I joined a mountain bike club and participate in enduro races. The last one was in October, and I will do the complete season this year with 7 events. Like for rally racing, you have timed stages and no pressure parts when you simply bike, enjoying the mountain scenery.

The last word is for you, don’t hesitate!

Doing endurance sports activities is an absolute need. I have my job, my family and this secret garden where I have time for myself. It’s vitally important to have all three together for me.